Tomatoes are a common feature of many diets and recipes. And it can be quite rewarding to eat tomatoes you grew yourself, especially since tomatoes aren’t challenging to grow.

Growing tomatoes involves selecting strong and healthy seedlings of disease-resistant varieties. Additionally, ample amounts of compost should be worked into the soil, the plant should receive up to eight hours of sunlight, and regular watering. Temperatures should be kept above 55°F (13°C).

This article is a detailed guide that explains how to grow and harvest tasty tomatoes. It lists some recommended varieties and some ways to store your harvest.

Tomatoes (or Lycopersicum esculentum, if you want to be technical) are one of the easiest vegetables to grow. You can grow them from seeds or buy seedlings from nurseries, garden centers, and even farmers’ markets. Seedlings are the best option if you’re a new gardener, as it’s easier, saves time, and you avoid the cost of buying additional supplies like flats, potting soil, and containers.

The best time to plant tomato seedlings is spring as the frost leaves and the ground thaws. But more importantly, when nighttime temperatures are consistently above 55°F (13°C)

Choose strong, healthy-looking seedlings without any brown or black spots on the leaves. Ideally, they should be four to six inches tall and have several leaves. You can transplant the seedlings directly into the garden soil, raised beds, or you can grow them in containers.

If you’ve got a large yard, you can transplant the seedlings directly into the soil. This method will work for all varieties of tomatoes and usually gives a better harvest.

You’ll have to choose a suitable location, one that receives lots of sunlight ( up to eight hours) and has good soil drainage, as tomatoes do not enjoy having wet roots. If you live in the south, select an area that provides some shade from the midday sun.

In the weeks before planting, mix the garden soil with lots of compost, as tomatoes thrive in originally rich soils. You can use store-bought compost if you don’t have any of your own. Mix the top ten inches of soil with the compost, about six to eight pounds will do for a square foot of garden soil.

When it’s time to transplant the seedlings, dig a hole about ten inches across and deep enough to cover up to 75 percent of the plant, as tomatoes frequently develop roots along the stem, and burying them like this will make for sturdier plants.

Space the seedlings well so that each one gets enough light and proper air circulation. Adequate spacing can also prevent the spread of diseases from infected plants.

The spacing depends on the variety of tomato. Indeterminate or vining varieties grow and produce fruit throughout the growing season. Determinate tomatoes reach a certain stage and stop growing, producing all their fruit within a short period, and will die off shortly after.

Determinate varieties like Celebrity and Rutgers should be placed about 24 inches (61 cm) apart, while vining tomatoes like Beefsteak Sun gold and Early girl should have 48 inches (122 cm) between them.

Growing tomato seedlings in raised beds is similar to growing them directly in the garden soil. The only difference is the raised bed, which allows for better soil drainage and aeration.

Like before, work some compost into garden soil, with some perlite or vermiculite for aeration, and fill the container with this mix. When growing tomatoes in a container, you need to pay more attention to the plant container itself. Ideally, it should be a material pot made of terracotta since these permit better airflow to the roots and allow water to leave the pot.

Still, you can use other types of planters, but ensure that there are several drain holes on the bottom, so that water can quickly go out, as having “wet feet” can make the tomato leaves turn yellow. The size also matters; it should be deep enough to bury about 75 percent of the plant. The table below shows proper container sizes determinate and indeterminate varieties.

Pro Tip
Plant one seedling per pot, and position it in a location where it can receive the most sunlight.

Caring for tomatoes, whether in a container or the garden soil, is much the same. You need to pay attention to how you water the plants, temperature, feeding, pruning, staking, and mulching.

After transplanting your seedlings, you’ll need to water the plant liberally, at least for the first three days, to treat/ prevent root shock. After this time, water the plants every other day during the growing season.

Water adequately so that the water gets deep into the soil. For tomatoes growing in containers, make sure that the water flows out of the container before you stop. Such deep watering encourages a vibrant root system and better crop yield.

The best time to water the plant is in the morning, not evening, to prevent evaporation and transpiration losses. Early watering also allows water droplets on the plant to dry off entirely, reducing the chances of fungal diseases.

However, due to varying environmental factors like temperature and humidity, watering schedules might not work well for all zones. Tomatoes in hotter and drier climates will need more water than those in cooler and humid areas.

One technique that works well, notwithstanding your local climate, is regularly checking the soil for moisture before watering. Put your index finger into the earth, and if it comes out dry, then water the plant.

If you ever need to water the plant in the evening, limit the water to just the soil, ensuring that it doesn’t touch the leaves, where it may sit overnight and might cause fungal leaf spot diseases. 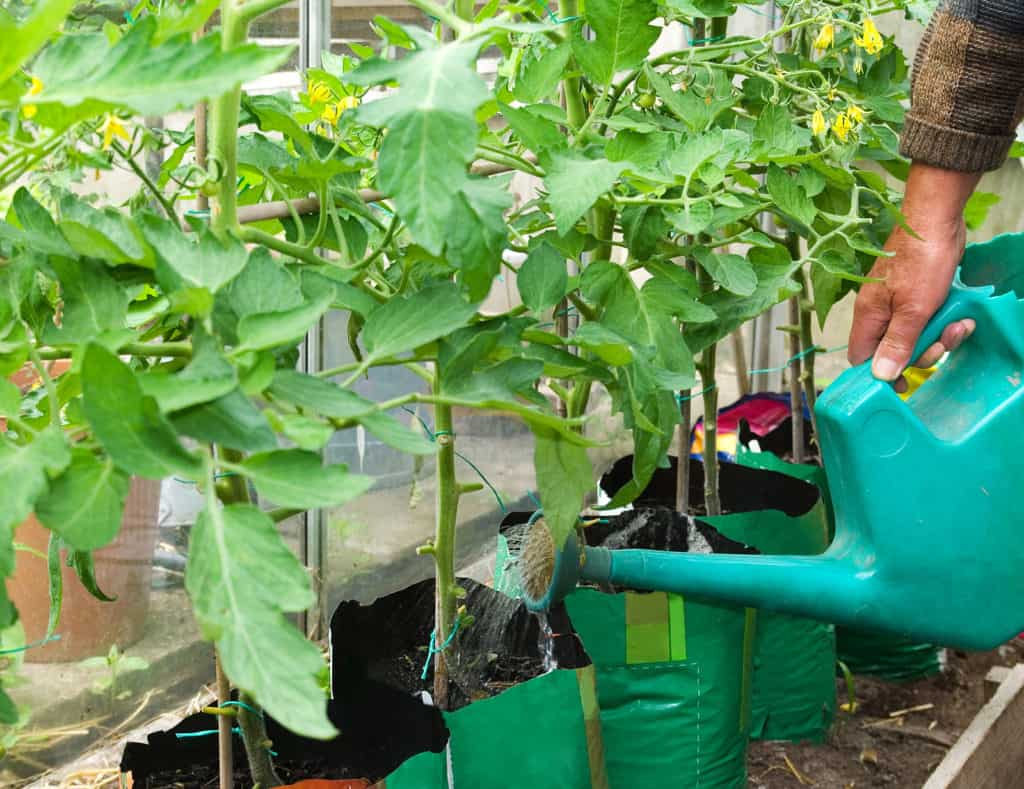 Tomatoes (and other plants) do not thrive in temperatures lower than 50°F (10°C), and even that is pushing it. Such low temperatures can cause poor fruit yield.

If temperatures drop or an unexpected frost occurs, move container tomatoes indoors and cover garden tomatoes with a tarp to protect them from the cold.

Tomatoes have weak stems and will need stakes or cages for support. Without support, they’ll grow along the ground, increasing the risk of a soil-borne disease.

It’s best to put in the stakes while the tomatoes are still small to avoid harming the roots later in the growing season.

Pro Tip
Tomatoes thrive in nutrient-rich soil, so in the fourth or fifth week after transplanting, you can spread a layer of mulch over the soil.

Tomatoes are heavy feeders, needing significant amounts of nutrients to flower and fruit. But before you apply fertilizer, it’s best to do a soil test to determine what nutrients aren’t present in the soil.

If the test results show that the soil is balanced, you can use an unbalanced fertilizer like 5-10-5, where the phosphorus content is more than nitrogen. On the other hand, if the soil is lacking nitrogen, opt for a balanced vegetable fertilizer. Phosphorus helps fruit production, while nitrogen favors greener leaves.

How To Fertilize Tomatoes

First, dilute the fertilizer to half strength, as overfertilization can cause plants to grow too quickly and put them at risk of diseases and insect pests.

Before transplanting seedlings, put some fertilizer at the bottom of the hole, and cover it with some soil before placing the tomato. Make sure you do this, as direct contact with fertilizers can cause root burn.

During the growing season, apply fertilizer once in two weeks. Water plants properly before applying fertilizer to reduce the chance of root burn. Spread the fertilizer in a ring, six inches away from the stem to prevent fertilizer burns.

You can also use Epsom salt solution to give tomatoes a boost and make up for secondary nutrients (like magnesium and sulfur) that tomatoes need but aren’t contained in most fertilizers. Use this less frequently (once a month), as Epsom salt is not a fertilizer.

It’s best to prune the lowest leaves as the plant grows, as water splashes can transfer disease from the soil to the leaves. Be sure to use a clean and sterile garden knife, as an unclean knife can also cause the diseases you were trying to avoid.

Weeds are bad; everyone knows this. Use your hands to pull out weeds the minute you spot them.

Tomato plants are plagued by several pests, including mealybugs, whiteflies, and spider mites. But the most common tomato pest is the hornworm, which can defoliate a plant overnight.

Aphids, mealybugs, and whiteflies are sap-sucking insects that leave the plants weak and cause yellow leaves. A strong spray of water can knock them off the plant. You can also spray some insecticidal soap to get rid of them.

Tomato Hornworms are large green caterpillars, so handpicking will work. Other ways to get rid of tomato hornworms include organic insecticides and beneficial insects like ladybugs and wasps.

Tomatoes suffer from bacterial, fungal, and viral diseases. It can be difficult to control diseases, so the best approach is to prevent an outbreak by planting disease-resistant varieties like Sungold, Rutgers, and Yellow pear, using clean and sterile garden tools, and keeping the garden as clean as possible.

Fungal diseases like fusarium and Verticillium wilt, and septoria leaf spot arise from too much watering and wet foliage. As such, avoid doing these to your tomato. Late blight is another fungal disease caused by dampness.

Bacterial diseases affect the leaves and stems, manifesting as black spots or specks.

Blossom end rot affects the bottom of the tomato fruit and is caused by insufficient calcium. You can control the rot by adding some crushed eggshells or organic fertilizer to the soil.

Viral diseases like the mosaic virus, cucumber virus, and yellow leaf curl virus can cause distorted, yellow leaves and stunted growth. Viruses are the hardest to control, as there are no known chemical cures. So destroy affected plants immediately, and do not use them for composting.

When a tomato is fully ripe and ready for eating, the skin turns from dull to glossy. It’s important that you allow tomato fruits to remain on the plant for as long as possible so that it’s more flavorful.

If the first frost is approaching, you can harvest any tomatoes that have begun to change color. These will ripen if you store them in a cool place and out of direct sunlight. Meanwhile, the solidly green tomatoes can be kept in a cool, damp place for up to a month to ripen. Do the same thing for any tomatoes that fall off the plant before they ripen.

The best place to store ripe tomatoes is the kitchen counter and not the freezer, as the skin will become loose and may come off after defrosting. You can also store tomatoes in cans or by drying them whole or sliced.

The following are some of the best types of tomatoes to grow because of their resistance to disease, great yield, and flavor:

How Long Do Tomatoes Take To Bear Fruit?

Why Are My Tomatoes Cracking?

Cracked tomatoes are caused by water stress when the soil isn’t kept moist but instead alternates between being completely dry, then wet, then dry again. Proper watering, as detailed in this guide, will prevent the cracks.

Tomatoes are a part of many recipes and foods, and they aren’t difficult to grow. All you need do is choose strong and healthy seedlings, and with the right soil, some water, mulch, pruning, and some fertilizer, you’ll soon have the joy of eating vegetables you grew with your own hands.

As you can expect, Claire is absolutely obsessed with succulents (in a healthy way, of course!). She’s got over 25 years experience as a gardener, specializing in succulents. She’s also a licensed Yoga instructor and a freelance social media expert.